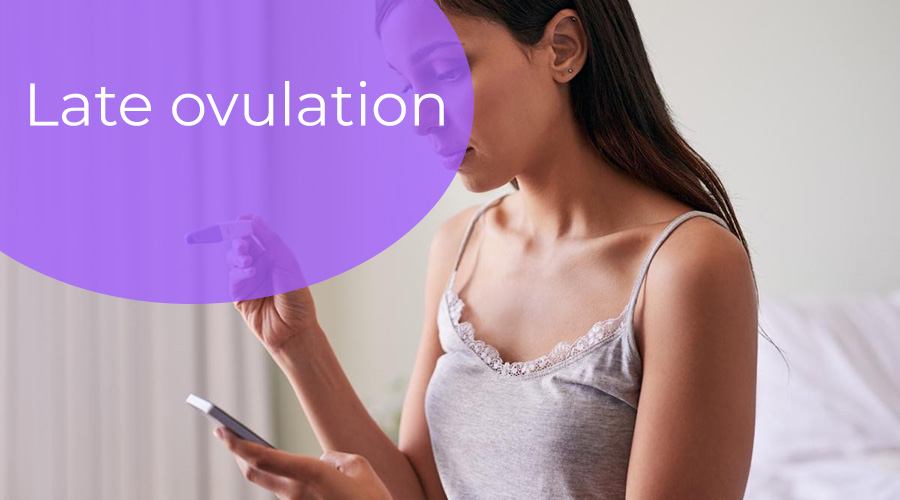 The human body is a miraculous machine that can do amazing things, like ovulate late. For many people, ovulation occurs around day fourteen of their cycle. However, for some people, ovulation can occur later in the cycle. This can be due to a number of factors, including stress, illness, and diet. Late irregular ovulation can cause difficulty in getting pregnant because it reduces the time frame during which pregnancy can occur. In this blog post, let’s get to know more about what is late ovulation and what we can do about it.

What is late ovulation?

Late ovulation is a condition in which ovulation does not occur until after day 21 of the irregular cycles. Late ovulation can be caused by a variety of factors, including stress, illness, and hormonal imbalance. Women who experience late ovulation may have difficulty conceiving, as sperm may no longer be viable after 3-5 days. Treatment for late ovulation depends on the underlying cause and may include lifestyle changes, medication, or fertility treatments.

If the egg hasn’t been fertilized by sperm, ovulation will be followed by a luteal phase in which hormones are released to trigger the shedding of the uterine lining.

What are the symptoms of late ovulation?

Most women know when they ovulate because they feel the symptoms. The most common symptom of ovulation is a change in the cervical mucus. It becomes clear, slippery, and stretchy. This is called fertile mucus and it means that you are most likely to get pregnant if you have sex during this time. Other symptoms of ovulation include cramps, bloating, a feeling of fullness in the pelvis, and breast tenderness. If you don’t usually notice these changes, you may want to start tracking your menstrual cycle so that you will know when to expect ovulation.

There are many potential causes of late ovulation, including:

In a study of women who were trying to get pregnant, those who reported higher levels of stress had a harder time ovulating. The women in the study were asked to report their stress levels in daily diaries, and researchers found that those with the highest stress levels were more likely to have delayed ovulation.

“We know that stress can affect how a woman’s body functions,” said study author Anne Marie Jukic. “This is the first study to look at how stress may delay ovulation.

Most medications will not interfere with ovulation. However, there are a few that may inhibit ovulation. Some anti-inflammatory drugs, such as ibuprofen (Advil, Motrin), can delay ovulation. Birth control pills can also delay ovulation, as can some antipsychotic medications. If you are taking any of these medications and are trying to conceive, talk to your doctor about possible alternatives. Hormone therapy. Human gonadotropins contain follicle-stimulating hormones and sometimes luteinizing hormone.

Polycystic ovary syndrome (PCOS) is a hormonal disorder that affects 1 in 10 women of childbearing age. PCOS is the most common cause of female infertility. It can also lead to long-term health problems such as type 2 diabetes, heart disease, and high blood pressure.

PCOS is a problem with how your body makes hormones. The ovaries make too many male hormones (androgens). This can prevent ovulation, the release of an egg each month. PCOS also causes small cysts to form on the ovaries.

The signs and symptoms of PCOS include irregular periods, excessive hair growth on the face or body, acne, weight gain, and difficulty getting pregnant.

If you think you have PCOS, see your doctor for diagnosis and treatment.

Breastfeeding has been shown to provide health benefits for both mother and baby. The American Academy of Pediatrics (AAP) recommends breastfeeding as the sole source of nutrition for the first six months of a baby’s life and continuing breastfeeding until at least 12 months old. Breastfeeding also provides important immunities to newborns.

Some women find it difficult to breastfeed due to sore nipples, engorgement, or insufficient milk production. If you are experiencing difficulties breastfeeding, consult your doctor or a lactation consultant for medically reviewed treatments.

How does late ovulation affect fertility and conception?

Late ovulation can have a significant impact on fertility and conception. For women who are trying to conceive, ovulation that occurs later in the cycle can be more difficult because the chance of becoming pregnant is lower. This is because there is only a limited amount of time each month when egg cells are available for fertilization. In addition, late ovulation can also lead to irregular periods and increased chances of having a miscarriage. If you are trying to get pregnant, it is important to track your ovulation so that you can plan intercourse during your most fertile days.

How does it affect menstruation?

Late ovulation is a problem that can affect menstruation. If ovulation does not happen on time, the body may not have enough time to prepare for menstruation, which can lead to problems like missed menstrual period or light bleeding. Until you ovulate, estrogen is released, which keeps the lining of your womb growing, and then ovulation triggers the release of progesterone, which helps the lining support a fertilized egg. Even if you ovulate late, you still have a chance of “catching” your fertilized egg in your uterine lining.

In conclusion, ovulation that occurs later in the menstrual cycle is more likely to result in a successful pregnancy. This is because the chances of conceiving a baby are highest when ovulation occurs early in the cycle. For women who are trying to get pregnant, it is important to keep track of their ovulation schedule and plan intercourse accordingly. There are many ways to track and stimulate ovulation, and couples who are trying to conceive should discuss the best method for them.